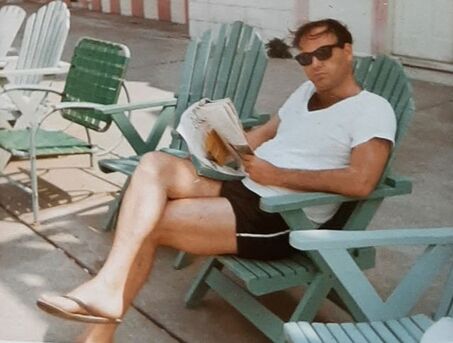 "California's first Beatnik public defender." -- Si Rosenthal
Simon (“Si”) Milyus Rosenthal, public interest lawyer and former dean of New College School of Law, dedicated his career to seeking justice for marginalized people, improving legal services and programs for low-income clients, and working for peace. Throughout his life, Si was adamantly antiwar. When asked by a San Francisco Chronicle reporter for an “example of obscene wealth” in 1983, Si responded: “The MX missile.”
Si believed the public interest is advanced by fighting for individuals’ rights under the law and by trying cases that set precedents and help bring institutional change for the advancement of all people’s interests. “The making of a good lawyer,” wrote Si in 1977, takes “intellectual discipline, hard work, and a firm commitment to quality. The poor, the disadvantaged, the ‘public-interest’ deserve more than cliches; they deserve the quality representation that only hard work produces.”
Born on March 11, 1935, in New York City, Si was the only child of Louis M. Rosenthal and Rebecca (“Ruth”) Wittes Rosenthal. Louis was a pioneer in the manufacture of radio tubes and extremely long-lasting light bulb, which he and partners produced and sold from a factory in Hoboken, N.J. In the late 1930s, the Rosenthals moved from Manhattan to Teaneck, N.J.
​From an early age Si was avidly interested in international politics and human rights—news editors began publishing his letters when he was only 15 years old—and Si joined the ​NAACP and the ACLU in 1955. Shortly after Si graduated from Teaneck High School, he and his parents moved to Los Angeles to be near Louis’s family: his parents chose not to tell Si that Louis had been suffering from leukemia for several years. Si’s father died on Nov. 22, 1954, a devastating shock for Si, who had just started his first year of college.
Si joined the National Lawyers Guild and the National Legal Aid & Defender Association (NLADA), speaking at conferences and publishing op-ed pieces. After 18 months with the public defender’s office, Si took Julia on a camping trip across Europe. The couple sailed to Denmark, bought a car and drove around northern Europe, took a guided tour of the U.S.S.R., and then drove west to Spain. By September they were settled in London, where Si helped lead peace marches during the Cuban Missile Crisis. The Rosenthals’ daughter, Justine Lou, was born in October.
In 1966 Si was named the first full-time director of the Legal Aid Society of San Mateo County, based in Redwood City, Calif., where he opened four regional offices. “There must be some concept of equal justice that goes beyond the written word, but goes into practice," said Si. "Because why should anyone respect the law, when the only contact he ever has with the law is at the end of a policeman’s club? Or some strange-looking papers that have been thrust in his hand, called a Summons and Complaint? The anti-poverty program is providing us with an opportunity to make justice more of a realistic concept.”
From 1968 through 1970, Si worked in Washington, D.C., as national deputy director and chief of the evaluation division of the Office of Legal Services, then part of the former U.S. Office of Economic Opportunity (OEO). The OEO’s Legal Services Division employed 3,000 attorneys in funded programs around the country.
Ever outspoken, Si invited the Washington Legal Services staff to an election-night “wake” at his house on Nov. 5, 1968. ​When ​Richard Nixon took office as President Jan. 20, 1969, he began to defund and dismantle the OEO, appointing Donald Rumsfeld as its director in May 1970. The appointment of Rumsfeld signaled doom to Si and his boss, Terry F. Lenzner.​
Si resigned later that year, although his departure was delayed. In a letter to Julia dated Oct. 24, 1969, Lenzner wrote, “I just want to tell you how much I appreciate your … letting us keep your husband for several more months. Si has been a tremendous help to me in these last few months as Director of Legal Services, and I felt that he would be of invaluable assistance for the future in the fight to save Legal Services.” Less than a month after writing the letter, Lenzner himself was fired by Rumsfeld.
In a New York Times article on April 28, 1971, Lenzner was quoted: “Mr. Lenzner said that Donald Rumsfeld, then director of the poverty agency, had ordered Mr. Lenzner to discharge Mr. Rosenthal because of information in the file that Mr. Rosenthal had subscribed to radical magazines and had belonged to the Lawyer’s (sic) Guild, a left-leaning legal organization.”

Si's invitation to the entire the Washington-based Legal Services staff for an election-night “wake” at his house on Nov. 5, 1968. 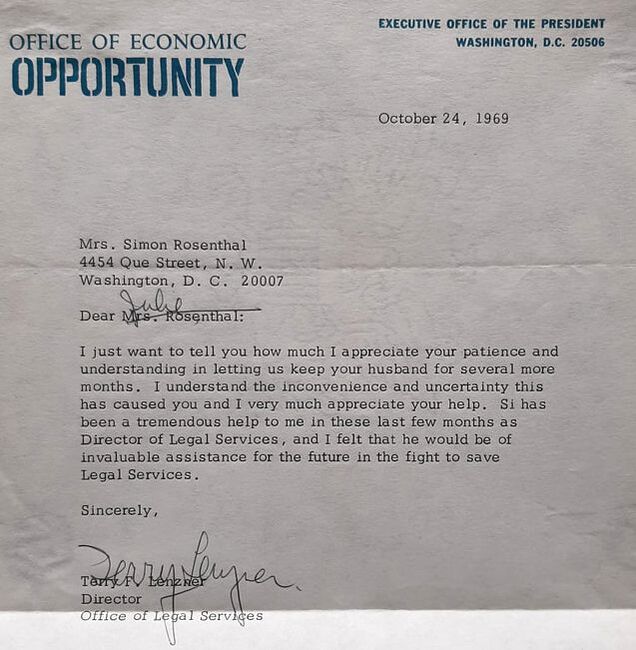 Si's resignation was delayed as the staff tried to save Legal Services.
From 1974 and throughout the ’80s, Si worked as a consultant for Legal Services and traveled around the country for the national office, evaluating programs and giving management training and coaching.
He enjoyed teaching and was an adjunct professor at Stanford University, Cañada College, and
​Catholic University Legal Aid Directors Management Training.
​“Mr. Rosenthal is a gentleman of particularly enlightened views,” wrote James Leavitt, Administration of Justice Program, Cañada College, in 1974. “A unique combination of administrative abilities, professional expertise and practical political experience.”
In his free time, Si traveled as often as he could, savoring restaurants, music, theater, the arts, and the company of his friends and family. He met his second wife, Emily Brewton Schilling, in 1996. Si and Emily started life together in a studio apartment on Maui, then moved around: northern California; New York City; Sarasota, Fla.; and back to New York City in 2011.
In May 2021 they moved to northwest Oregon to live near Si’s children and grandchildren. After a short illness, nursed at home by his family with hospice support, Si died of natural causes on Dec. 27, 2021.
He is survived by his wife Emily; his daughter Justine (Janine Johnson) of The Sea Ranch, Calif.;
​his son Brian (Joanna Wagner) of Scappoose, Ore.; seven grandchildren; and two great-grandchildren. 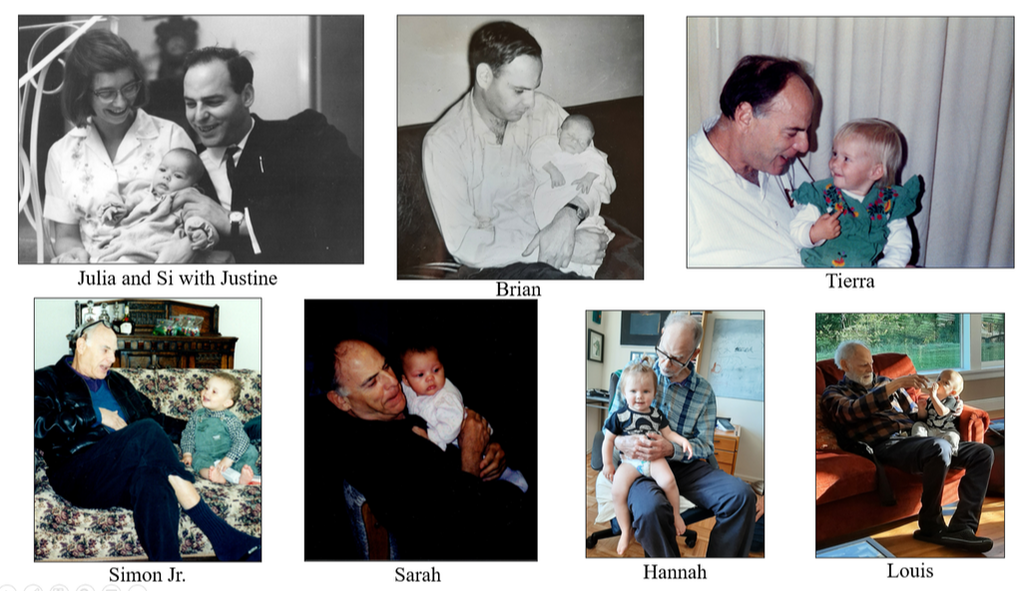 Si with children and grandchildren 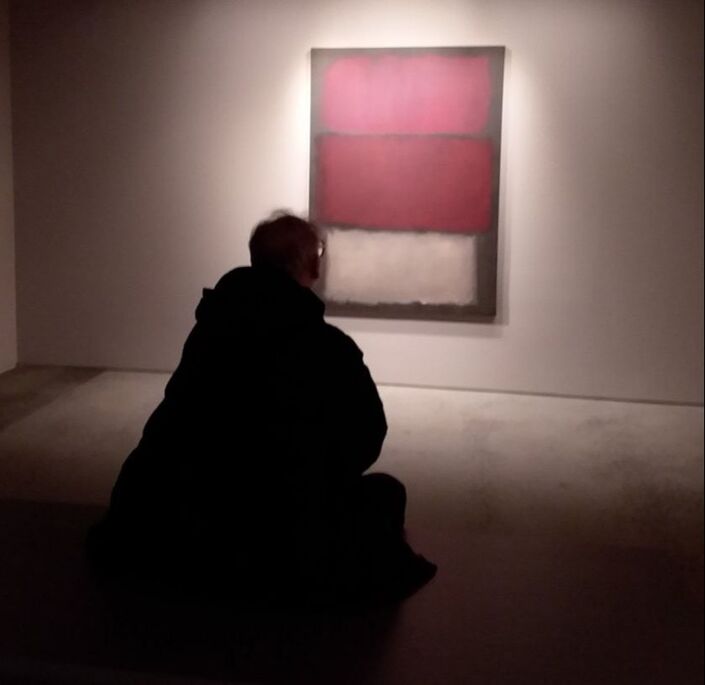 To the extent possible under law, Emily Brewton Schilling has waived all copyright and related or neighboring rights to Simon Milyus Rosenthal biographical text.