Born Nov. 4, 1930, in Toledo, Ohio, Jim Brewton died in Philadelphia, May 11, 1967. At the time of his death at 36, Brewton was beginning to distinguish himself as one of Philadelphia’s premier painters and printmakers.

While he is known for portraits, prints and his abstract, graffiti-inspired paintings, Jim's training was traditional. He studied at the Ruskin School at Oxford in 1954-55 and the Pennsylvania Academy of the Fine Arts (PAFA) from 1955 through 1958. At PAFA, Jim was a protegé of Franklin Watkins and Hobson Pittman. Pittman owned a self-portrait by Jim, which Pittman featured during tours of his art collection and exhibited in the show, “Paintings, Drawings, Prints, and Sculpture Collected and Owned by Fourteen Philadelphia Artists.”

Jim Brewton was influenced by Marcel Duchamp, André Breton and Alfred Jarry. In the early 1960s he met Danish artists Erik Nyholm and Asger Jorn, and was enthralled by the expressive CoBrA group's work, helping Jorn with his Comparative Vandalism project and riffing off of the Situationists. These European, avant-garde inspirations were extremely unusual for a Philadelphia-based artist at the time.

Jim’s work won awards and prizes, and he was championed by critics while he was still a student. “Mr. Brewton’s career was launched dramatically,” ran his obituary in The Philadelphia Inquirer in 1967, “when his canvas The Suicide of Judas won the prestigious $1000 Schiedt prize …. the tall ex-marine sergeant, a veteran of the Korean war, thus captured—at the very early age of 28—the same award William Glackens, Stuart Davis, Hans Hoffman, Ivan Albright and Charles Burchfield had earned in their maturity.”

From his base in Philadelphia, Jim traveled whenever he could, to Spain, France, England and Denmark.  In early 1964, Jim lent several works he owned to the Philadelphia Museum of Art’s Asger Jorn exhibition. Rather than teaching, he took part-time manual jobs and concentrated on painting and printmaking. One former employer remembers ordering a sumptuous display of paint samples for his store so Jim could take the paints home. “In return, he gave me a copy of The Pataphysics Times, one of his prints.” ​ 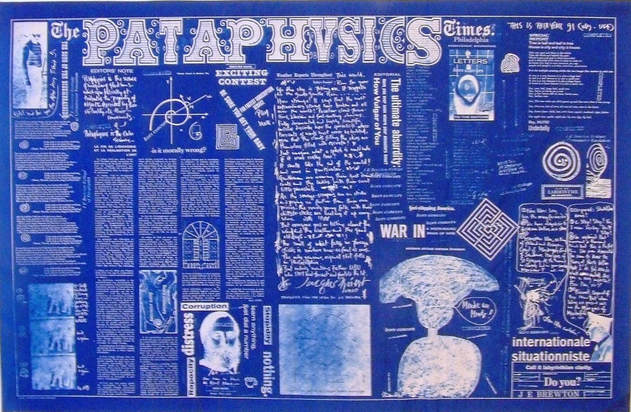 In the last years of his life

Jim was represented by Harry Kulkowitz’s Kenmore Galleries, on Rittenhouse Square in Philadelphia. His prints were selling well, and the Philadelphia Museum of Art has a half-dozen in its permanent collection. From his colorful, CoBrA-inspired phase, Jim had progressed to muted, wall-like dream pieces incorporating graffiti. By 1965, the works had evolved into a synthesis of graffiti (“anonymous and therefore for all mankind”) and Alfred Jarry’s philosophy of Pataphysics. Jim called these works Graffiti Pataphysic. In Graffiti Pataphysic, he had developed his method of artistic exploration.

By the time he died in 1967, Jim had “had several one-man shows, and museum curators were beginning to exhibit interest,” as Nessa Forman wrote in The Philadelphia Inquirer.  “There was an artist,” Forman continued, “who was ahead of his time, who was brilliant, sensitive and nonviolent, who loved his art and just wanted to paint.  And he committed suicide….”

Four days after his death, Jim’s work was shown at the Socrates Perakis gallery in Philadelphia, along with that of Jim McWilliams, Thomas Chimes and sculptor Paul Anthony Greenwood.  “Artist’s Suicide Gives Tragic Overtone to Exhibit,” ran the headline for Dorothy Grafly’s review.

A year later, a memorial show was held at the Peale Galleries at PAFA. Hobson Pittman wrote for the catalogue, “A truly gifted artist. … Jim Brewton, from his earliest work, gave evidence of a peculiar and constant search for the nebulous and metaphysical symbol. … His standard of judgement was … innate, as it is with genuinely endowed artists. His deep
understanding of aesthetics was evident in everything he did.”

In 1971, Harry Kulkowitz held a memorial show, co-curated by Mrs. Ronald Weingrad, at his Kenmore Galleries. Proceeds funded a scholarship at PAFA.