Billy Had a System (Knopf, 1952) written and illustrated by Marion Holland 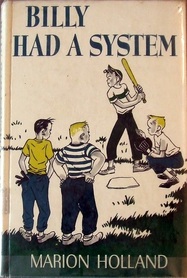 The day-to-day adventures of Billy Kidwell and Bruce Martin--best friends and best of planners. Among Billy's systems was his plan to win the booby prize at birthday parties:

"... You had to hang around and hang around, waiting for the refreshments, and while you were waiting, there were all these games. Hunting things, like peanuts and jelly beans; or guessing things, like how many buttons in a jar. There was always a prize, but no matter how good you were, somebody else was likely to come along and be better. But then, there was always a booby prize, too, for the poor dope that was the very worst.
"Well, Billy just specialized in being that poor dope.
"He would hang back and act shy, so as to get the last turn. That way, he always knew just exactly how dumb he had to be in order to clinch the booby prize, without anybody getting suspicious. It was foolproof, and besides, the first prize was usually a book or a handkerchief, but the booby prize was usually something worth while...."
Reviews and copies for sale:

LibraryThing
Marion Holland's copyrights are in force and protected. For rights and permissions, or to report suspected copyright infringement, please contact us here. Thank you.