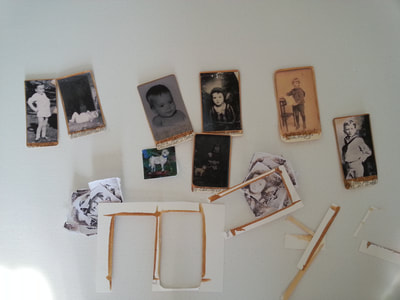 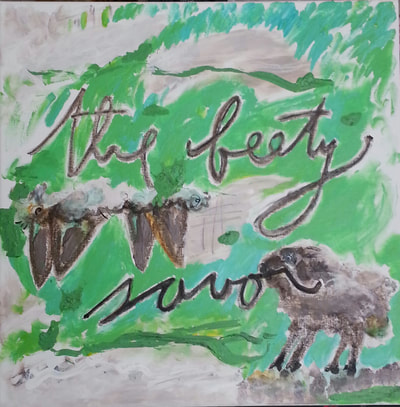 "Artistic coloured photographs of prize babies." --James Joyce.
When I began creating my faux antique photographs, I was struck by how interesting it is to return the gaze of children born long ago. It's also poignant. Those children, staring confidently or uncomfortably or angrily at the camera, posed or costumed by adults: what are they thinking? Did they have any inkling of their fate? Would they be famous, artistic, brave? Would they die tragically young? Would their lives be hard?
I got nostalgic about the pre-digital age. Gone are plastic film canisters, so useful for storing small amounts of mixed paint. Gone are printed contact sheets, or proof sheets, from full rolls of film.
Spurred by the death of David Bowie, I began looking for photographs of young people who later became artists, writers, singers and performers. So much of our characters can already be observed, even when we're babies.
I decided to re-create contact sheets for the subjects I chose, painting the black borders and using appropriate film-company names in the borders (that is, the company's film would have been available when and where the photograph was taken). The numbers are the children's birth and death dates; hints as to their identities are painted in. If I found a second pose in the sitter's series, I snuck it into the sequence.
The constraints for "Proof Sheets" (2016), my series within the Ulysses works, are:
1. The subject must be an artist, writer, singer or performer.
2. They must be dead.
3. The photograph must be from youth.
4. They must be posed, uncomfortable or hyper-aware of the camera.
5. They must be world-famous.
6. They must have touched me personally.
7. They must have been born before I was.
8. There is one clinamen, or exception.
Below are some shots of the works, with identities and hints pointed out. The series is intended to be shown without the information.
​Thank you for your interest! 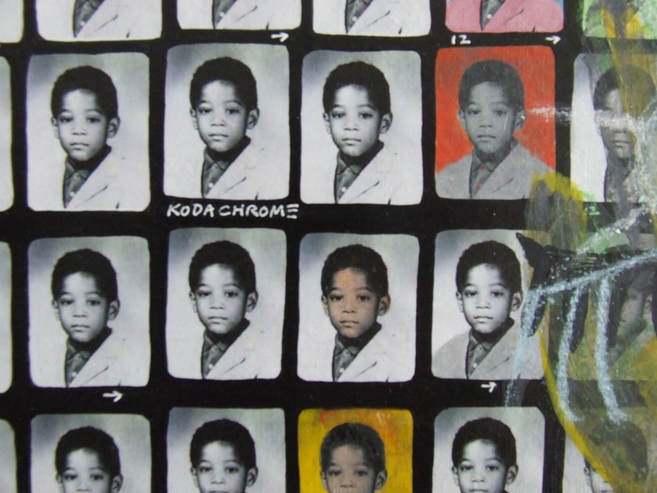 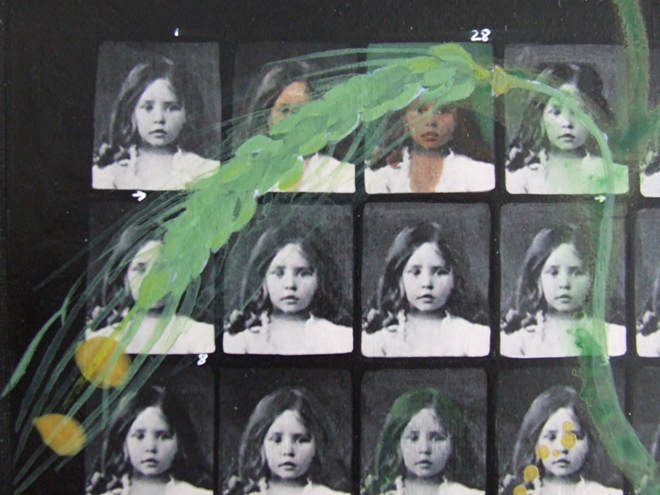 David Robert Jones (January 8, 1947 - January 10, 2016) m/m on cardboard, 12"x12" (2016). David Bowie's baby picture moved me to create this series. Listening to his "Starman" from 1972, and looking at the happier of the two images I found (detail shot, third picture from left, top row), I was struck by his smile when looking up. I made four or five other works about this photograph. 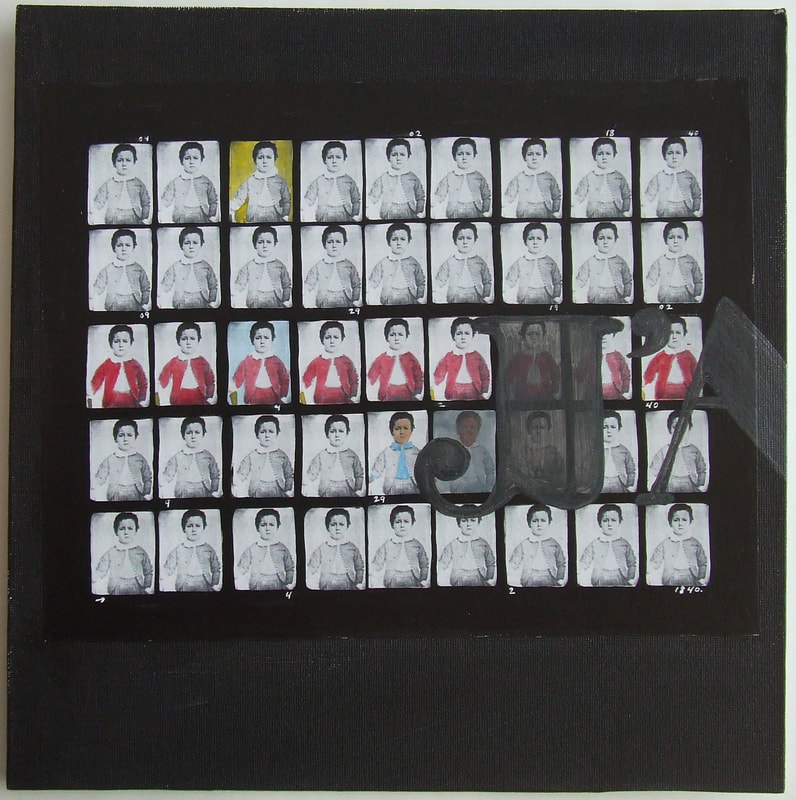 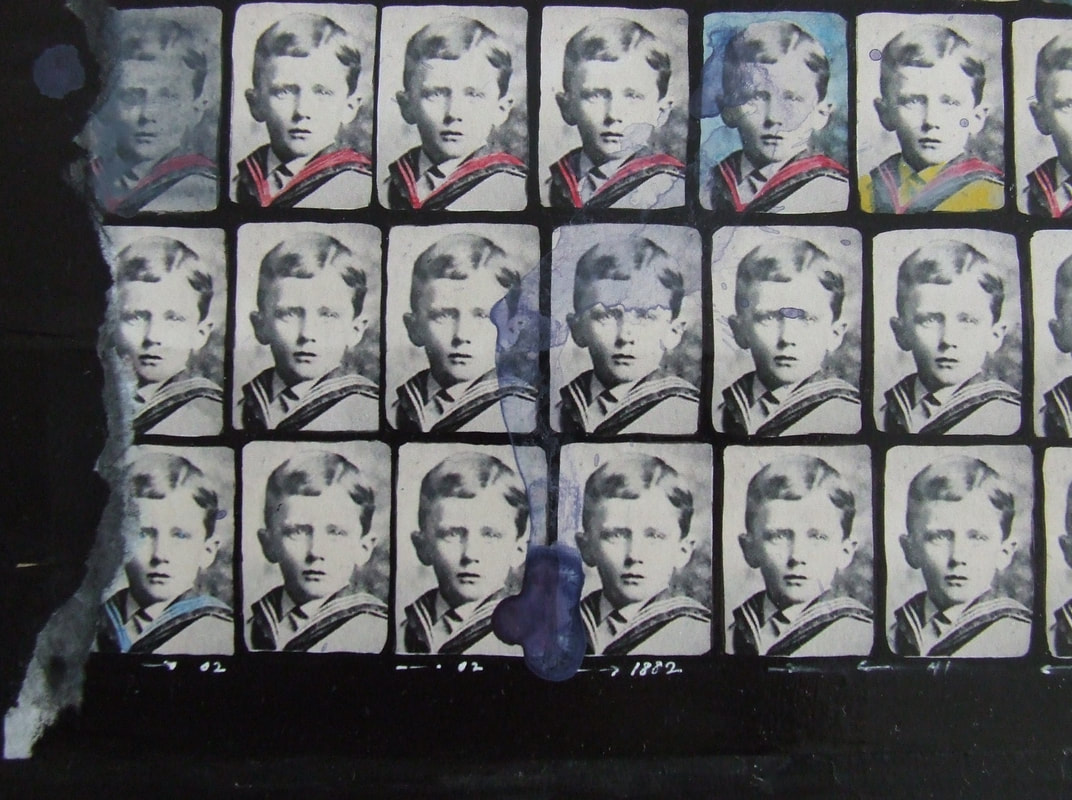 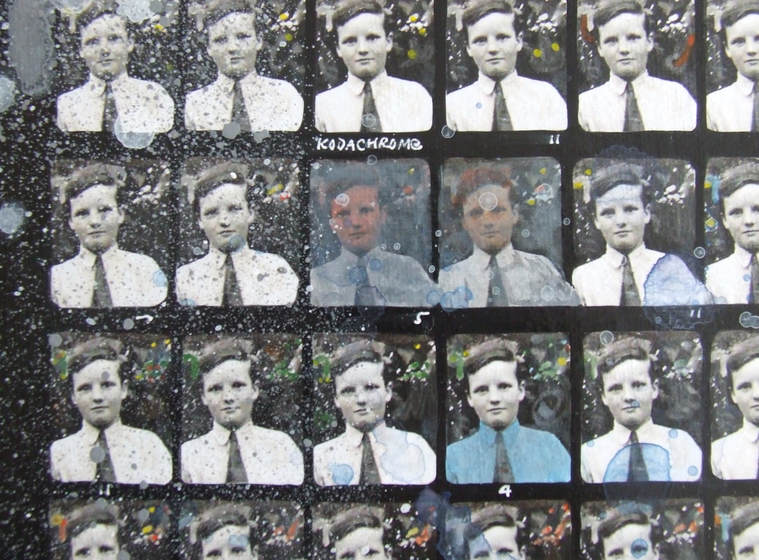 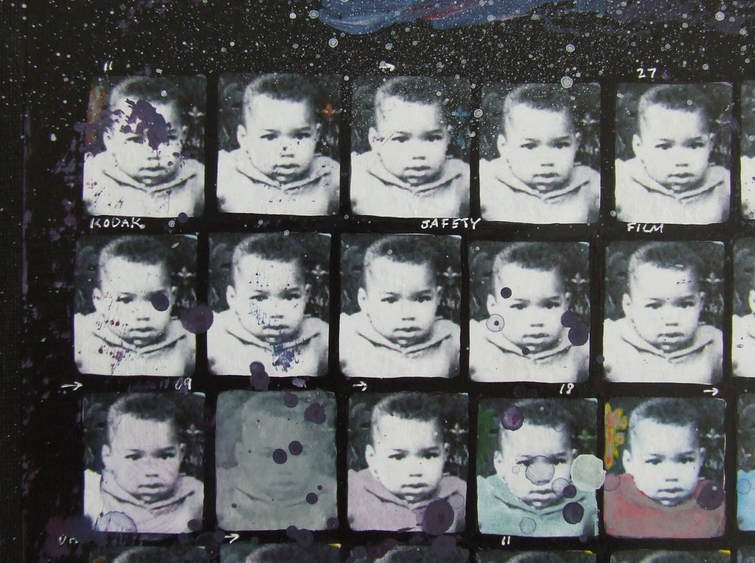 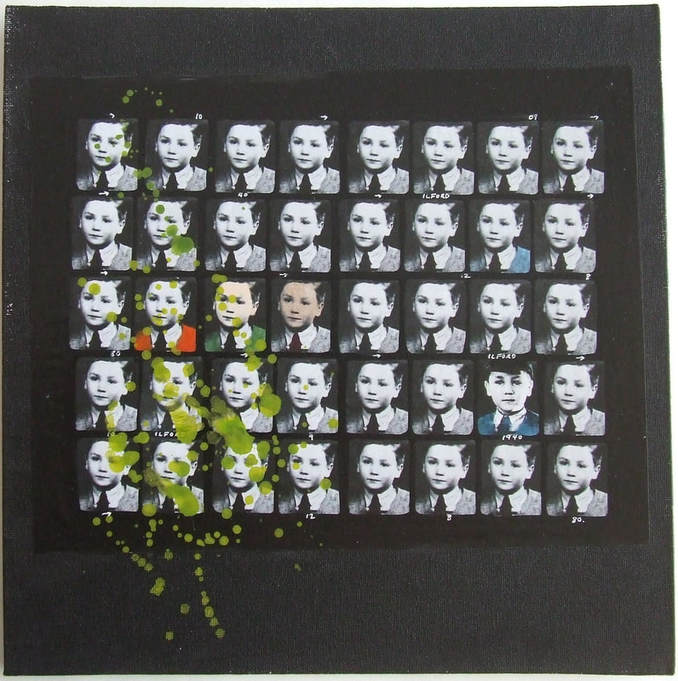 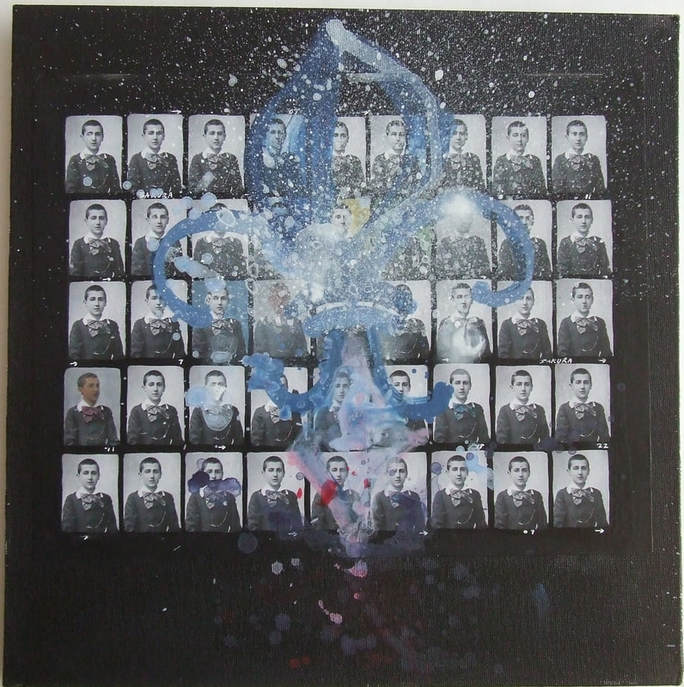 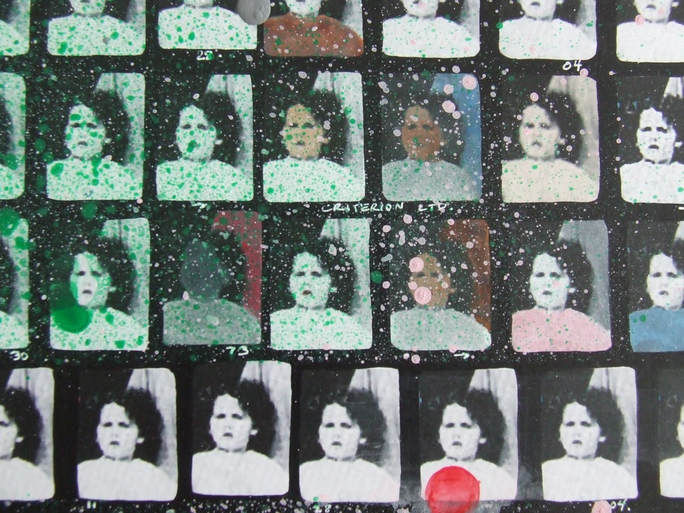 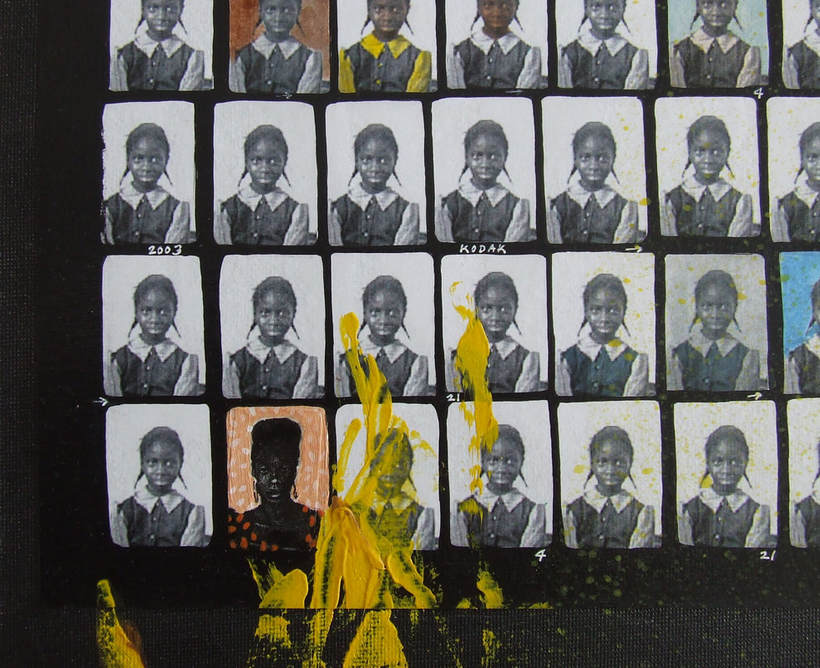 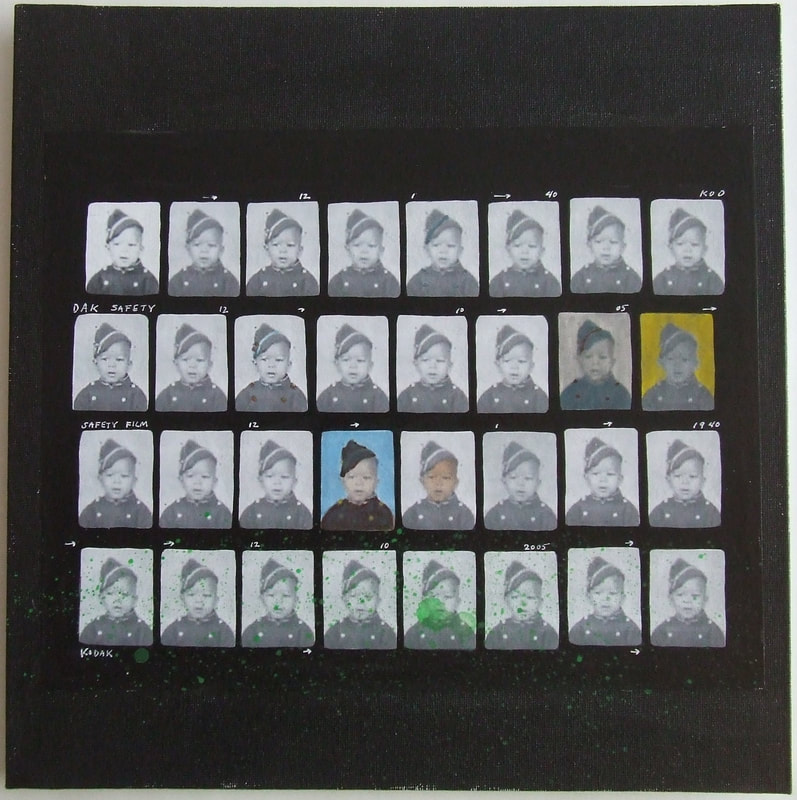 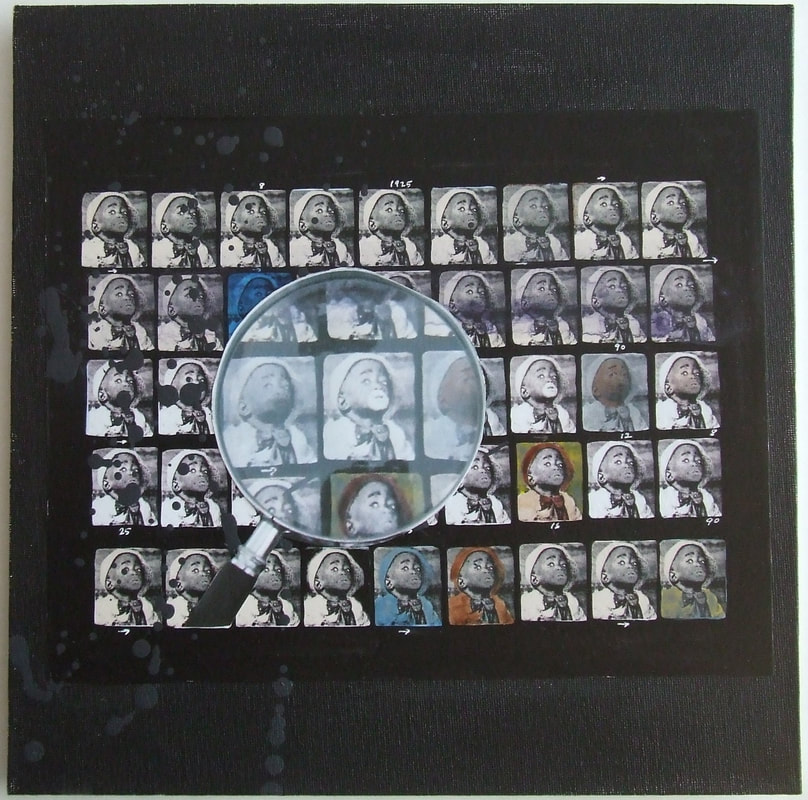 Sammy Davis, Jr. (December 8, 1925 - May 16, 1990) m/m on canvas, 12"x12". In the full photograph I found, Davis is posed standing on a chair. The angle of his head and the horror (or fear) in his eyes are mesmerizing. I wanted to include this photo in this series, but was made so uncomfortable by the whiteface-sort of weird makeup around young Davis' mouth that I retouched the image before duplicating it. I then called attention to the original image by magnifying it.